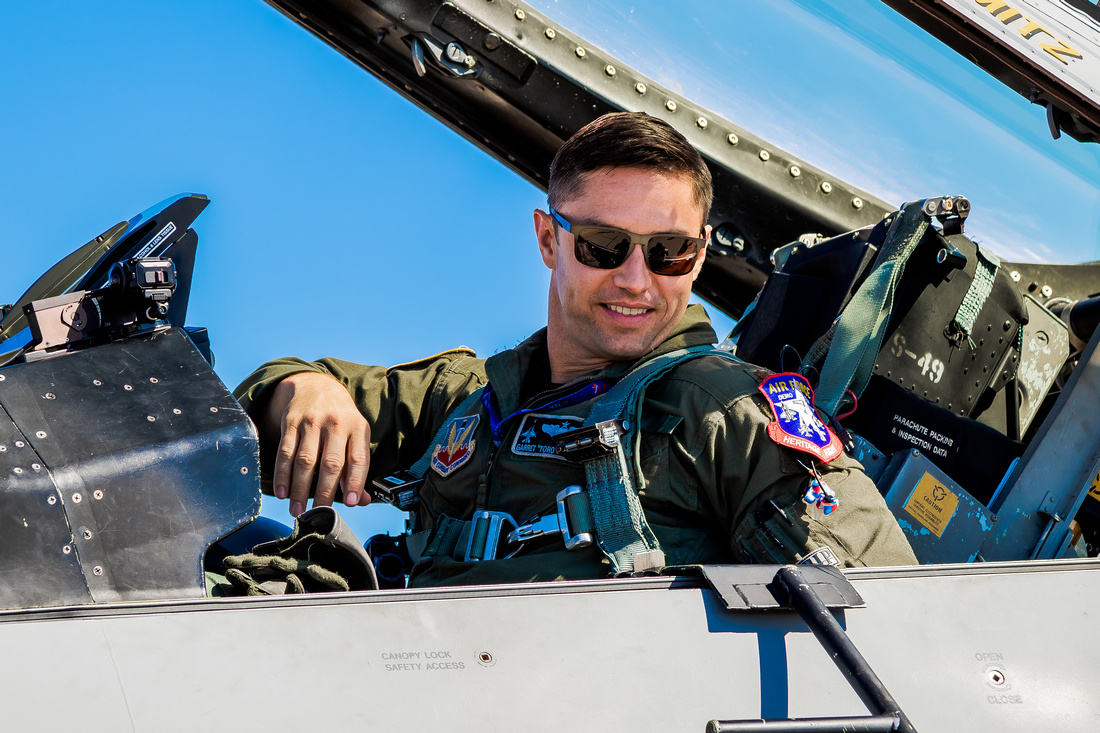 How are you doing here at Davis-Monthan today?
Toro: “It’s awesome! I mean, I’m in Tucson. I love Tucson. I’m from the area, and I’m here flying with warbirds.”

What’s it like to be out here with the Viper Demo as well as the other three ACC Demo Teams getting ready for airshow season?

Toro: “It’s really neat coming out here for this. We never see each other around. We may have one or two shows on the road where we’re actually with another team. To have all four of us here, we get to talk to each other a lot, we can figure out how they operate their demo to help us get better, and we have the experience of the warbird pilots. We have some of the best pilots, the only pilots in the world that are Heritage Flight pilots, so to get there and have their eyes on what we do just makes us better, it makes them better, and overall the whole Heritage Foundation better.”

Can you take us into the flights with the dual-seat “D” model F-16s for the team?

Toro: “So part of what we do is we give our maintainers rides so they can accurately describe what it is to experience the demonstration. I’m not always there to answer questions, so they can answer them for me. We’re the only aircraft that has two seats, so we bring a two-seater so that we can give our team members and other teams rides and essentially describe what a demonstration is like.”

It’s your second year on the team. What do you want to get out of it?

Toro: “First season you kinda get the butterflies out of your system and you figure out how you want to fly. Each demonstration, even though it’s guided by a regulation, you can still add your own flare to it. I know how I like to fly. I just want to go out and put on a great show for everyone, so if you’re around for one of our shows, please come out and say “hi” to the team at the tent.”

The second season is your final season on the team. What do you want to get out of the Viper Demo the most after your time on the team is completed?

Toro: “Just build relationships with the other pilots on the teams. When it comes down to it, the people are the best part of the job, like meeting people like you. I got into the Air Force and was introduced to it when I was eight and I saw the Viper Demo Team perform at an airshow, so I remember it very vividly when I saw the max performance climb when the jet spirals into an oblivion and I remember seeing it and looking up until I couldn’t see it anymore. I was like 'That’s what I want to do.' Ever since then, everything I did was working to be a fighter pilot and come out here and do this, and hopefully there’s some kid out there who was me that’s inspired by it, not necessarily to join the Air Force, but doing what they want to do. So the interaction is the best part. Flying is awesome, but the people along the way, like the pilots and airshow community, are the best.”

So is the max performance climb your favorite maneuver?

Toro: “Absolutely! Just because one it’s really fun to do because I get to go straight up and fly full afterburner and spiral until I’m at the top of the air space. So, for that reason because it’s fun and it’s what got me into the Air Force. It’s got a special place in my heart.”

If there was any aircraft in the Air Force today that you have never flown before, what would you want to fly the most?

Toro: “That’s a good question. It’s hard to not say the Viper. I would probably change it up and go with helicopters. They assist F-16s in rescue missions, so I think they have a great mission picking up downed pilots and people in distress that called in. I’d pick the HH-60.”