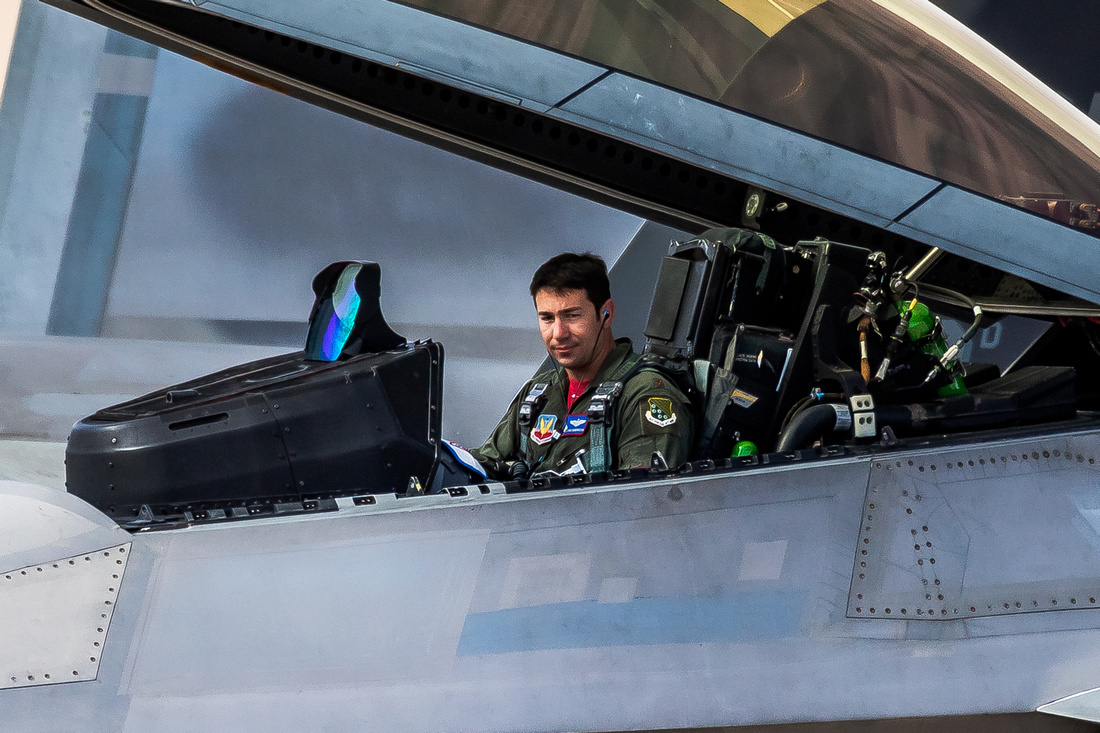 How are you doing today here at Davis-Monthan?

Cabo: “I’m doing awesome! It’s a great day here in Arizona, to see all the airplanes here and warbirds. It was a little windy today, but aside from the wind it was great.”

After all your training during the certification process, how awesome was it to fly at your very first public event with the team at Singapore last month?

Cabo: “It was great! We got really great support from Hawaii. They brought the jets out. They brought the maintainers out. It was honestly very simple in terms of planning efforts. For us, we flew out commercially, borrowed their jets, and again they provided great support. It was really cool, especially at an international stage to take an F-22 out there to one of our partner countries and tear the skies over Singapore. The water was blue. The sky was really blue. It was awesome!”

How was it to train with your predecessor, Lt. Col. Paul “Loco” Lopez?

Cabo: “The whole training portion itself was great to learn with his experience, because each demo pilot has two years or so on the demo team and the other thing is with those two years you get a lot of really good invaluable lessons with your experience with different airshows, getting to learn a lot of information, and to pass that information on to me which was super helpful, especially going overseas and just the airshow circuit in general. I thought it was very valuable for me and appreciative of him to pass over his advice.”

Before joining the team, you had flown the F-22 at airshows in the past. How did that experience help you train for the team?

Cabo: “I think that experience definitely helped me out quite a bit, whether it’s working with air bosses and foreseeing the airshow circuit in terms of safety to put on a safe show for people to watch and enjoy it. There are a lot of things that we take and meticulous details to ensure we are safe for people to execute over the crowd. Having that experience flying in Australia, flying in Anchorage, flying in Fairbanks, and different airshows was really good prior to getting this job because I had some of that background knowledge and at least I was a lot more familiar than most of the pilots in the squadron.”

Do you have a favorite maneuver?

Cabo: “Hands down, my favorite maneuver of the demo is the dedication pass. It’s not the most dynamic in terms of backflips and spins. Obviously the jet is very capable and you see that in the demonstration. The dedication pass is huge to me for a couple reasons. First and foremost, it’s for our brothers and sisters in arms and for those who paid the price overseas or even during missions here in the states to protect our way of life and American people, so the meaning and the symbolism behind that specific pass to me is what’s really important. The second piece is we’ve worked really hard to synchronize the show to make everything look really cool, and we play a song by Granger Smith called ‘They Were There’ and that song is really amazing. Granger Smith did a documentary that was about 55 minutes or so, and the documentary was him walking through the Big Bend National Park in Texas which was five days to tell the stories of the people who were lost. So it dives into their life, and their experience and service, and the price they paid for our country. So not only are we doing it for them, but to match that up with somebody that I’ve met multiple times and spent some time with. Putting a phenomenal song together in with that specific maneuver to me is my favorite part of the show.”

One of the missions of the ACC Demo Teams is to recruit people into the Air Force. However at international shows you don’t have that opportunity. So how is the mission different compared to domestic shows?

Cabo: “One of the biggest things about them is, including different teams, is to enhance our international relationships with other countries and to demonstrate those partnerships that we have with our allies across the globe. One of the shows this year is Singapore, a huge ally in Asia and Pacific theatre. The Indo-Pacific Region as you’d imagine is a massive area, with the Pacific and all the islands that are there. So having partners in that theatre like Singapore are huge. Us being at those places just shows our support for them at the largest show in Asia. We’re going to Santiago, Chile down in South America. They fly F-16s, so obviously a foreign military sales with Chile. We’re going to Canada, which is obviously a huge ally north of the border. We share the NORAD missions. We fly alert. We constantly protect the north border airspace. Us being at those shows just symbolizes the fact that the United States is always there to support them as a country and as an ally no matter what happens, and it just strengthens our partnerships. At the end of the day, yes there are some beautiful airplanes that are awesome, but we’re also meeting people and building personal relationships with them.”

What was the experience like to fly the F-22 for the first time?

Cabo: “It was really cool. I’ve flown F-15s for about three and a half years or four before that, and to step into an aircraft that has no backseat and was never designed to have a backseat, and you’re there by yourself for the very first time and you have experience flying airplanes, this is bar none the most capable airplane I have ever flown in my entire life and likely will ever fly in my entire life. Even there are other countries making airplanes that are age wise in terms of when they were made, and the Raptor is unparalleled in so many ways. Unfortunately we can’t show a lot of that at airshows. Only a fraction of it. But there are so many things about the Raptor that make this jet remarkable. To know that the Air Force trusted me to fly it, and now to take this jet on the road and show the capabilities of it, and also teach our young pilots back home, that’s a huge responsibility. So in that regard, first flying that jet is awesome!”

If there was any fighter jet you have never flown, which would you choose?

Cabo: “I think if I were to pick one airplane that I’ve never flown that I’d love to fly, as far as combat aircraft, I think it would be super cool to fly the YF-23, the competitor for the F-22, just to see it’s capabilities, and also to see what the technology was back in the day, and what was different about the YF-23 versus the F-22. They were both designed to be very niche aircraft and both designed to be air dominance fighters, meaning to control and dominate the airspace from enemy fighters. So it would be neat to see the comparisons of what was different about that airplane compared to the F-22.”